New Review of Horses to Ride, Cattle to Cut 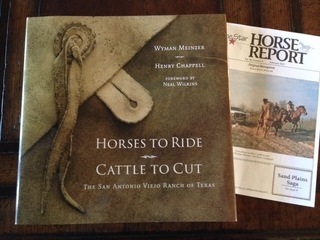 "Twelve years after collaborating on a book about the famous Four Sixes Ranch, Texas State Photographer Wyman Meinzer of Benjamin and award-winning novelist/journalist Henry Chappell of Parker have published a monumental portrait of one of the state's largest but least known cattle empires.

"Horses to Ride, Cattle to Cut is a meticulously researched and engagingly written history of the 300-year-old San Antonio Viejo Ranch of South Texas and the East Family, who has owned and operated it for more than a century."