Tags: Rattlesnakes
A few days ago, I received an email from Kim Rothe, my editor at Texas Wildlife:

"Just a friendly reminder about your feature on rattlesnakes."

Perhaps someone in an editorial meeting decided I ought to write a rattlesnake piece, and no one informed me. More likely, I signed up to write the piece and promptly forgot all about it. In any case, I'm happy to write the article, and ever-patient Kim has mercifully given me an extra 10 days.

Irresponsibility on my part, you say? I prefer to think of myself as a high-maintenance writer who's worth the extra aggravation.

I could simply pull out a few field guides, bone up on rattlers, call a couple experts, reuse one or two old tales, write a decent article, and collect a check. Sometimes, that's the best you can do.

Instead, I'm heading west day after tomorrow for a very close look at some rattlesnake dens - just to get in the right mood. I have an excellent guide.

Last night, I took my old copy of J. Frank Dobie's Rattlesnakes from my shelf and spent a couple hours freshening up my rattlesnake lore. As I read about 10-foot rattlers and prickly pear flats carpeted by snakes, I kept hearing the voice of one of my favorite Texas philosophers:

I just realized that my blog is on your blogroll, but not vice versa. I fixed that.

And here is my rattlesnake story.

Chas, it's great to hear from you. Thanks for adding me to your blog roll. Now, I'm off to read your snake story!

Here is an Arizonan who had a much rougher time of it. 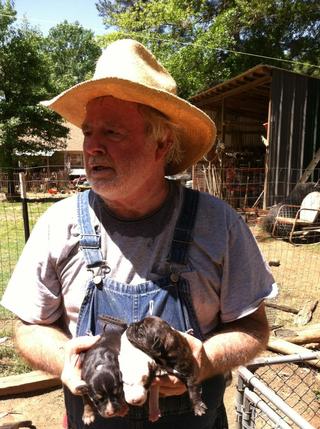 Donny Lynch with three feist puppies
A few days ago I received a text message from my old friend and dog training mentor Donny Lynch:

"I have come out of the cave age."

This was indeed the first text he'd sent me. Attached was this photo of Donny with three squirrel dog puppies, taken by his wife, Lucille. As expected, several more photos followed, all of dogs.

Donny Lynch is a Dog Man.

Most people like dogs, and lots of people love them. But there are very few Dog Men and Dog Women, people whose lives are wrapped around working dogs, who daydream about dogs, who will visit your home and spend more time with your dog than with you.

Like most Dog Men, especially the old-time backwoods variety, Donny takes a casual approach to dog training. None of the formal yard training common to pointing dog and retriever people. He simply trains as he goes about his daily routine. When a pup starts toward him, he'll whistle and call her to establish the association between the command and coming to the boss. A pup is lazing beside his feet in the den? Perfect time to introduce "sit-stay." Or maybe he'll take a kibble from the pocket of his bib overalls, toss it out a few feet and say, "Whup!" By the time the pup heads to the woods, she'll know that "whup" means "Heads up! Something's afoot!"

Being a man of his time and place, Donny will sometimes threaten to "put a boot in that dog's ass" but he never does. In fact, I've never seen him get the least bit rough with a dog. He rarely raises his voice.

He gets his dogs in the woods nearly every day, and not just during squirrel season. Often, on summer nights, my phone will ring. I'll answer to the sound of Donny's dogs treeing a 'coon. No comment necessary, although he'll sometimes add, above the din, "You better get on out here."

A couple years back, during squirrel season, we were eating lunch at a little store near Karnack, in deep East Texas. As usual, a hunter filled every chair in the little eating area. The parking log was full of pickups outfitted with dog boxes. The conversation turned to the subject of whether or not a sure-enough 'coon dog could be called off a tree. This can be a serious issue when a 'coon leads the dog across some broad body of water and there's no boat handy. The general consensus was that it was nearly impossible.

Donny swallowed a bite of cheeseburger, cleared his throat and said, "You hunt that dog about 13 days straight and he'll come off that tree when you call."

Called one good sighthound off deer, consistently. She had trouble with antelope til she went blind from diabetes.

This is a test post for your new format-- came over after reading you new water piece. You do know about the Plains of St Augustine proposed aquifer grab? Of our current and unresolved town problems? But perhaps not of the new letter to the residents of town from the multinational offering to secure our water if we sign on?

Your blogroll is almost a perfect map of a rare political phenomenon: people I more or less agree with. Drop a line! I may be slower but as a friend said for years I aint dead yet!

(There is also a rumor that Harry Greene has read me).

PS You HAVE to read the newest book-- I want your review. Send snail mail prompt.

Steve, it's great to hear from you. Thanks for checking in. I definitely want to read your latest. I'll email you my snail mail address right away. A Sportsman's Library and An Eternity of Eagles arrived on my doorstep Tuesday afternoon, along with Cat's Shepherds of Coyote Rocks. I can't wait to read them. I've been following your water emergency with interest and concern at Q. Things are getting ugly in our states. Hang in there. Let me know how I can help you raise hell.

Speaking of calling dogs off, a certain yellow cur-dog may have to be bumped with an e-collar. Hogs. She can't leave them alone.

Enjoyed reading about Donny in this blog and in your past articles.
Anything about squirrel dogs and squirrel hunting is appreciated.

Tags: Laziness, Empty Promises
Well, here I go again, trying to blog. I'm hopeful, but, based on past performance, not optimistic. Perhaps moving from Blogger, where I started Home Range in 2007, to my website, will provide some needed change. Probably not, but we'll see. I write for a living and find that my limited creative energy is best preserved for paying work. Still, when I don't blog, I miss the conversation with readers and fellow bloggers, and I'm forever thinking of good blog posts that would compliment my published work.

Please let me know what you think of the commenting process on this site, especially if you find it cumbersome or have problems.

JR i have a dog out of donny lynchs stock of dogs!it would be ahefty price even thought about getting rid of her got when she was a puppy NOT FORSALE?BUT IF YOU THINKING ABOUT GETTING A SQUIREL DOG HES THE MAN? IF YOU WANNA GO HUNTING!TEXT OR CALL JIM REYNOLDS BUNA TX NICHOLS CREEK 409 920 8787?????

This is the first blog that I have ever posted to but the process seems easy enough.
Since you are now Texas boy and not far from my home I find your articles and post interesting.

Thanks for your kind words and for stopping by, G.L. I just got back from Idaho and have some new material that I plan to post soon. I apologize for the light posting.

Good to hear from you, JR. I agree - Donny is the squirrel dog man. Thanks, too, for your offer. I'll take you up on it sometime.