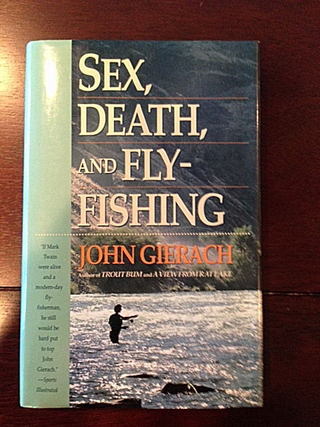 
Back in the nineties, I plowed through every book John Gierach had written and snatched up his new ones as soon as they came out. Since his break-through Trout Bum (1986) he has been incredibly prolific and, even more impressive, consistent. Although I’ve liked some Gierach essays better than others, I don’t recall a single one I’ve finished and thought, “Well, he’s finally showing some strain.” Not to say he doesn’t sweat over every piece. They’re all tight and elegant, never pretentious.

If I had to pick a favorite Gierach Book, I’d grit my teeth and go with The View from Rat Lake, (1988) published by Pruett, the small, respected regional publisher that also published Trout Bum. (Simon & Schuster has been his publisher for the past couple decades.) But if I had to choose a favorite essay – a just-short-of-impossible task – I’d have to go with “Neither Snow, nor Rain, nor Gloom of Night,” the ninth essay in his Sex Death and Fly-Fishing (1990). If you’ve spent a significant portion of your life hunting, fishing, or birding, you know that good things often happen in weather sane people call “miserable.” Which brings to mind another great Gierach line, one I can’t find at the moment. But I love it and quote it from memory:

“Then the weather turned really nasty. It was perfect.”

I’ll quote precisely from “Neither Rain …”:

“The Blue-Winged Olives happened at least once, either on the Frying Pan or the South Platte: a dank, hideous day of wild fishing at the end of which we wring out our clothing, drive to a bar, and sit in a corner steaming, sipping coffee, looking mean and crazy.”

Been there? I’m thinking of quail hunting in the hills south of the Middle Pease on days so cold your teeth hurt when you got winded enough to breathe from your mouth, and you’d drive back to a certain little diner to sit among other quail hunters and drink a gallon of coffee, knowing the day was growing even colder and you couldn’t miss the late afternoon hunting.

In the last and best part of “Neither Rain …” Gierach describes several days of autumn fishing on the Frying Pan, with his buddy A.K. Best:

“The clouds were low enough that I couldn’t see the lip of the canyon, only where the red cliffs, now more of an antique rust color, dissolved. The rocks were wet and shiny, with rainwater running over them, sometimes in flat sheets, sometimes in little eroding streams that you could hear over the noise of rain and the river.”

The fishing was fabulous, and Gierach landed a big rainbow .

“There had been no other fisherman, and all day only two or three cars had passed on the road, but as we climbed out of the river a guy in some kind of sports car pulled up. He rolled his window down two inches and said through the crack, “Getting any big fish?”

“’I just landed a five-pound rainbow on a number eighteen dry fly,’ I said.

“The guy was young, well-dressed, dry, warm, sitting in a sports car with the heater going.

As I quote John Gierach, summer solstice is less than a week away. It’s getting hot in North Texas. I’m looking forward to that first cold, drizzly, perfect day of fall. In the meantime, I plan to reread a bunch of Gierach essays.