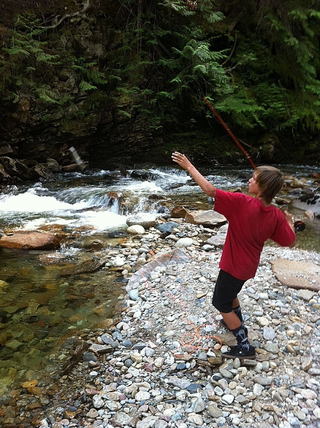 Cade with his first brook trout
Just got home from a weeklong trip to Northern Idaho with Jane and the grandkids. I took a six-weight rod thinking we'd try some of the bigger streams, but Cade much preferred the small, fast streams and high country lakes, which we had almost entirely to ourselves.

Having learned to fly fish by catching bream on popping bugs, Cade was sure he wanted to try dry flies on that quick water. You know how it went.

Grandpap: Pick it up! It's dragging!

Grandpap: Under water. Pick it up!

After a few minutes, against much protest, I took the rod, clipped off the Irresistible, tied on a marabou muddler, and cast it downstream. After only two or three strips, I felt a solid tug and handed the rod to Cade.

I've created a maniacal fly fisherman. He's all about muddlers and wooly buggers. He don't need no stinkin' dry flies - for now.

Yes, we're working on our release technique. He was excited.
6 Comments

Excellent story !! (I think I lost my original reply)
So, I guess West Virginia is next.....right? I understand that we are in small stream heaven around here and I am in dire need of some expert, hands on instruction (Cade can decide whether to bring Grandpap or not) Hughes and Rosenbauer are great on paper, but I don't even know what rod to start with for these tight places.
Really excited that you had a great trip and and memory building time with the grand kids.
Truly PRICELESS!

Gregg, it's great hear from you. I showed Cade your reply, and he said, "I'm down for West Virginia." Much to my sadness, Cade and his little sister, Gracie, had to go back home to CA this past Tuesday. It sure is quiet around here. They'll be back for some squirrel hunting around Thanksgiving.

As far as tight water fly tackle, you might want to take a look at Chad Love's recent post and conversation at The Mallard of Discontent. He's talking about fishing for bream in small creeks, but I think all of the same concerns apply to trout fishing in small streams. Be advised, though, Chad and his readers are talking about very light tackle - 2 and three weight rods, in the 6-foot class. A 6-foot fly rod is a specialty tool, one that I don't think I could ever learn to cast well. If you're looking for an all-around small stream rod that might double as a good bluegill rod, I'd think about a 3 or 4 weight rod in the 7.5-foot range. You'll have a far easier time casting. Counter-intuitively, a longer rod - 9-feet, say - sometimes works best on small, quick streams where you need the extra reach to keep as much line off the water as possible. Often, the only way you can get a good drift with a dry fly is have only the leader, tipitt, and fly on the water. Otherwise, the currents will grab that fat fly line and drag your fly.

However, you also live in smallmouth bass heaven. If you have to get by with only one rod, I'd recommend a 9-foot 6-weight graphite rod. It'll handle the bigger smallmouth flies, and, in a pinch, serve on all but the smallest, brushiest streams. That's a start, but by all means, seek local expertise.

Ah, a deer chase. I'm just glad you got your dog back. I don't like the idea of electronics in the field, but sometimes there's no other solution. Maggie was a horrible deer chaser, and ruined a bunch of hunts before I broke her with an e-collar. Nowadays, nearly all serious hound/cur folks use the tracking collars. As my coon-hunting friend Wayne McCray says, "They sure do save a lot of steps."

"However, if you're looking for somebody to go fishing with ... well ... be careful about making invitations. I'll take you up."

When! (Doing my very best Elwood P. Dowd impression)We have 130 acres and enough room for you, the lovely bride, and anyone else that would like to come.......Maggie is a must of course. No AC in the home but we are up high enough that we always have a good breeze

Furthermore, Jane is spending a lot of time in Virginia, on business. Some ideas are beginning to form ...

I don't think I have your new email address. Shoot me a note.