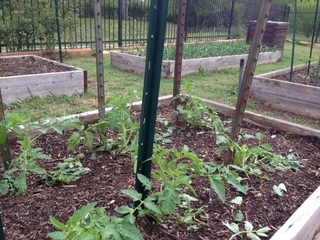 Two hailstorms and a late frost have been rough on the Chappell garden this spring.


The second hailstorm of the season hit last night. Golf ball-sized hail did a number on the family garden, never mind the roof, garage door, and my daughter and son-in-law's Honda.

The plants in the photo are my second planting. A late frost and the first hailstorm destroyed all twenty-six plants. Those in the foreground are Early Girls, an indeterminate variety that produces well here in North Texas, where the big beefsteak varieties won't set fruit. Even though several of the plants were effectively topped by the hail, I should be able to coax out suckers to replace the damaged main stems. In the other bed, I have an determinate variety - Bush Early Girls. Those tend to come in all at once and are tremendously productive. The plants then go into decline. Although they're just as tasty as the indeterminate version, we can most of them because you just can't keep up otherwise. Such damage as these plants suffered will probably translate into lost tomatoes.

Little black-eyed pea plants and pepper plants came through fine. Cantaloupes, cucumbers, and beans aren't up yet. I may have to cut back the damaged onion leaves.

We'll see. Boy do I feel for real farmers. 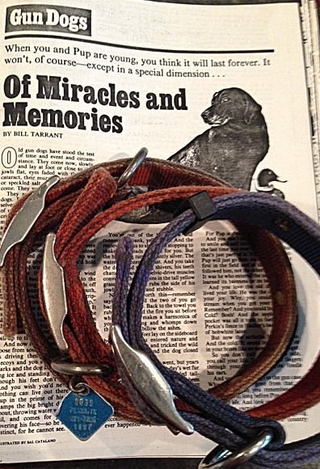 To write about gundogs, especially your own, is to risk sentimentality - a risk worth taking. Tarrant pushed it everytime out, and sometimes went over the edge. But not here.

“They are the iced mace of wind thrown by bad-dad winter, off to the north, blowing the redleg mallards off their last haunts. Blowing them south, flying like buckshot. And you’re gripping Pup and whispering “No head up,” and you fit the duck call to your lips. It is cold and you know it will freeze to the skin. But you call. And the lead hen throws her body high, looking down and back, seeing the iced-in blocks pointing bill-up to the slate sky.

“And now they come, shingles rippled loose from some old barn and the wind is driving them crazily toward your decoys and you stand and the old gun barks and the dog launches. He’s breaking ice and standing high in the water, though his feet don’t touch bottom. And you wish you’d never shot. For nothing can live out there. Not even Pup in the prime of his life. Yet he clamps the big bright drake and spins about, throwing water with his whipping tail, and comes for you – the drake covering his face – so he must swim by instinct, for he cannot see.

You’re out of the blind now and running the bank, yelling out. And the retriever comes to shore, not stopping to shake, and heads straight for you. But the black dog turns instantly silver. The water has frozen that fast. And you take the duck and the dog shivers, his teeth chattering, and the pelvic-drive muscles convulse. Then he spins in the tall yellow grass; he runs and rubs the side of his jowls in the mud and stubble.”

What a great example of vivid writing. I wonder if people can appreciate that style anymore with lower word counts and a loss of pep in our prose. I'd like to see this type of writing make a comeback. Thanks for posting this.

Dave, thanks for checking in. I'm with you. I'd love to see more of this kind of prose. Things have gotten awfully flat and safe. It's hard to imagine another Tarrant or A.J. McClane coming along. But we can hope. 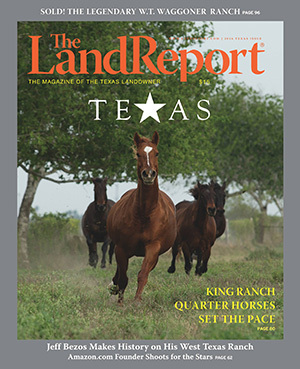 Had a fine time working on this one - with great friends Wyman and Sylinda Meinzer, Eric O'Keefe, and our host and friend James Clement, down at Santa Gertrudis. We worked hard during the day and drank a lot of wine at night, sitting by the pool house, the Big House looming in the darkness. Now I can't think of King Ranch without remembering peacocks plucking peanuts from Wyman's hand. 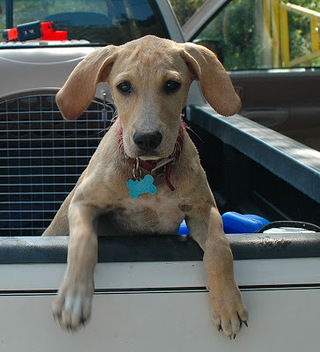 But true. She'll be nine in June. Here's Little Cate-Cur at four months, after a swim on a hot October afternoon. There's a lot of white on that muzzle nowadays, but she's still pretty quick. A few days ago I saw a squirrel with only half a tail. I've eaten several that didn't die of gunshot. And a lot more that did after being treed by a little yellow mountain cur-dog.

Beautiful Cate! Delighted (and not surprised) to know that she's still giving squirrels a run for their money. My big cur-dog Smoky and younger cur-dog Jasper are hale and hearty as well, and send Cate their absolute best. Take care, Henry, and good hunting to you both!

Luisa, it's great to hear from you! Thanks for stopping by. Likewise, Cate sends her best to Smoky and Jasper. I'm glad they're thriving, and hope you are too! Have a good one. Let's keep in touch.

Tags: Hemingway, For Whom the Bell Tolls 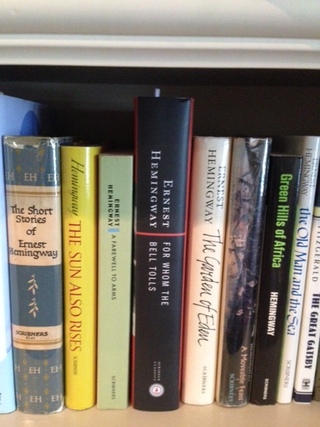 "El Sordo was making his fight on a hilltop. He did not like this hill and when he saw it he thought it had the shape of a chancre..."


“Then there were the hammering explosions past his ears and the gun barrel hot against his shoulder. It was hammering now again and his ears were deafened by the muzzle blast. Ignacio was pulling down hard on the tripod and the barrel was burning his back. It was hammering now in the roar and he could not remember the act of contrition

“Then, through the hammering of the gun, there was a whistle of the air splitting apart and then in the red black roar the earth rolled under his knees and then waved up to hit him in the face and then dirt and bits of rock were falling all over and Ignacio was lying on him and the gun was lying on him. But he was not dead because the whistle came again and the earth rolled under him with a roar. Then it came again and the earth lurched under his belly and one side of the hilltop rose into the air and then fell slowly over them where they lay.”

Ernest Hemingway, For Whom the Bell Tolls