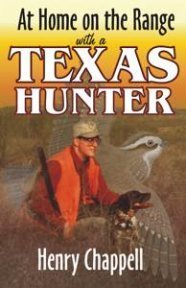 We fell into a pattern. Out of our sleeping bags, reluctantly, at dawn. Water and stretch the dogs. Breakfast – sausage, scrambled eggs, peppers, and salsa rolled up in tortillas; then coffee sipped in the truck cab. Then down out of the confines of the canyon just as the sun rose far enough above the West Portrillos to light the base of the Floridas.
&nbspWe nearly always found Gambel’s first, usually in the brushy creeks or up in the rock hills in the juniper. The dogs would go birdy, then creep or cast about to point again. We got few covey rises, usually just groups of twos and threes and then singles as we worked an area and spread the birds about.
&nbspBlues proved much more difficult. We usually found them just as the sun lighted the grassy flats, but they gave us the slip time and again. One morning as we debouched our canyon, a nice covey ran across the road in front of us and gathered in plain sight in the sparse grass on a juniper-studded hillside. We don’t road hunt, but we couldn’t resist the opportunity. We backed up, put our shotguns together, and cast Heidi and Dee. We shot two birds over points. The rest simply disappeared.

At Home on the Range with a Texas Hunter

Bobwhites in the Texas Panhandle, prairie grouse in the Flint Hills of Kansas, Gambel's quail in New Mexico's arroyos, blue quail on the staked plains, and doves and Mearns quail in Arizona. In these lyrical essays, Henry Chappell examines the bonds that connect hunter, hunting dog, land and prey. At Home on the Range evokes a powerful sense of history and place and never shies from the responsibilities and ethical struggles that every hunter faces.


“With Henry Chappell’s At Home on the Range with a Texas Hunter, western sporting literature comes of age. Nobody has ever written so eloquently about western birds and bird hunting as Henry Chappell. He is a natural storyteller, a stylist, and a thoughtful conservationist. Anyone interested in the southwestern environment should read this book, hunters and non-hunters alike.”


“[Chappell] is possibly – with apologies to James Brown – the hardest working bird hunter in west Texas and without a doubt one of our best writers.”


“Henry Chappell can really write…He’s devoted, he’s knowledgeable…he knows his history, his geology, his ecology, his zoology…He also has a nice turn of phrase. [At Home on the Range with a Texas Hunter]deserves a place on your bookshelf."


“Henry Chappell is a brave man…In this artful book of nature essays, At Home on the Range with a Texas Hunter, he lays bare thoughts and feelings that most hunters have but admit to only reluctantly…his words on the subject of why he hunts hit their mark in a way that hunters and non-hunters alike will understand.”


“In At Home on the Range with a Texas Hunter, Chappell offers a series of engaging, highly recommended essays on the bonds that exist between hunter, hunting dog, and prey…Chappell evokes a true sense of hunting, complete with its responsibilities and ethics.”


“This collection should not be relegated to a hunting genre…These selections much more closely resemble a love story; a man’s love for the land, his love for his dogs, his love for his sport. After just a couple of essays, readers recognize Chappell’s blend of unique perspectives.”