&nbspFrom Baldy Point, Mountain Home or other prominences, the eastward view reveals the country’s gifts, suggests a way of life, and a way of living on the land. From about 9,000 feet, the timbered slopes fall away to native shortgrass and midgrass prairie – blue grama, wheat grass, prairie junegrass, and taller grasses along the creek bottoms.
&nbspWagonhound Land and Livestock Company rests on the northern slope of the Laramie Mountain range in southeastern Wyoming, just south of Douglas. A few miles to the north, the North Platte River bends sharply eastward on its way to Nebraska. Wagonhound Creek, named for a rough crossing where pioneer wagons often
broke their tongue-axel junctions, called “hounds,” flows northeastward through the ranch toward its confluence with the Platte.
&nbspThe 200,000-acre ranch, assembled over the past decade, encompasses the original Wagonhound property along with numerous historical houses, schools, and ranch buildings. Descendants of original homesteaders still work the ranch.
&nbspThis is semi-arid country. The region receives an average of only 12 inches of precipitation per year. Yet, the Wagonhound is relatively rich in surface water, and, just as important, the rights to that water. In addition to the aforementioned Wagonhound Creek and its tributaries—Maneater Creek, Latham, Creek, Corral Creek—and La Bonte Creek and West Fork Creek, both tributaries of the North Platte River, the ranch collects water in dozens of stock tanks and larger reservoirs. Thirty-one center-pivot irrigators draw from the various tributaries of the North Platte and the river proper. In spring, flood irrigation systems convert grassy bottomland into lush hay meadows.

Wagonhound: The Spirit of Wyoming 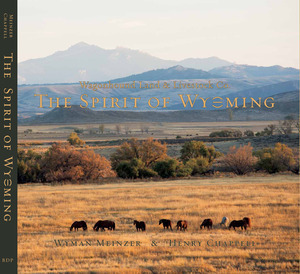 Wagonhound Land and Livestock is first and foremost a working cattle operation. On its 200,000 acres, mostly in the foothills of the Laramie Mountain Range, in southeastern Wyoming, cowboys still earn their living on horseback, working cattle in much the same manner as their ancestors did more than a century ago.

At the same time, the Wagonhound program embodies an innovative philosophy that has made it one of the top players in today’s highly competitive cattle and quarter horse markets. With an abundance of water from the North Platte river and its tributaries, and state-of-the art irrigation systems, the Wagonhound maintains a self-sufficiency rare among modern cattle ranches.

Yet, despite its focus on production of top cattle and ranch horses, Wagonhound is renowned for its stewardship of some of most stunning and ecologically diverse ranchland in North America.

In this defining study, Wyman Meinzer and Henry Chappell capture the essence of the Wagonhound Way – and the Spirit of Wyoming.