Cade and the Cottonmouth 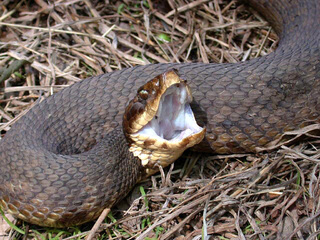 Fish often in the South and you'll meet one of these. Despite their abundance and reputation for aggressiveness, water moccasins rarely bite humans.

My grandson Cade, who's staying with J. and me this summer, surfs in water frequented by great white sharks, but the first time we fished a small North Texas lake, he worried about cottonmouth water moccasins. Of course he forgot about snakes as soon as he started catching fish. Before long, he was finning his float tube into the snakiest looking backwater he could find, working his fly over lily pads and around brush and stumps.

I told him that when he meets a cottonmouth, he should just back up while keeping an eye on it. Likely, it will hold its ground or try to chase him out of the area. Don't be stupid. It doesn't want to bite you; it wants you to leave.

Sure enough, just before sundown last night we were fishing the upper end of a small lake, when Cade said, "Grandpap, there's a cottonmouth." A nice, big one actually, about thirty feet away, but swimming toward him. I suspect the splat of the popping bug brought the snake out to investigate. I told Cade to back up. He did. The snake stopped. Cade kept backing up.

Thus ended the lesson. Nobody hurt. We fished until dark. The snake encounter didn't even come up on the drive home. Another southern fly fisherman has learned to take cottonmouth water moccasins in stride.

I am certain that Cade with never forget the lesson taught him by his Grandpap!

I am very proud of your grandson heeding your advice. I would need a defibrillator.

I am impressed; he definitely didn't get his calm, cool, and collected reaction from me. Hell, you would NEVER find me anywhere near water moccasin territory; I'm still traumatized from that scene in Lonesome Dove (Dad, you know the one.....)

Gotta have a water moccasin or rattlesnake encounter to accompany a percentage of all hunting and fishing stories from the South and South Central regions. Making memories! Now for some fly fishing in Okeechobee, bass around the Government Cut and the alligators we use to encounter.....

Thanks for stopping by, Fred. I'm learning some lessons myself. Funny how that works.

Donnette, he handled his first encounter a lot better than I handled mine.

Jamie, that scene has scared more people out of the water than Jaws.

Gregg, I told Cade that everybody has a cottonmouth story, but I don't know anyone who has ever been bitten. On the other hand, I know lots of people who've been bitten by copperheads and rattlesnakes.